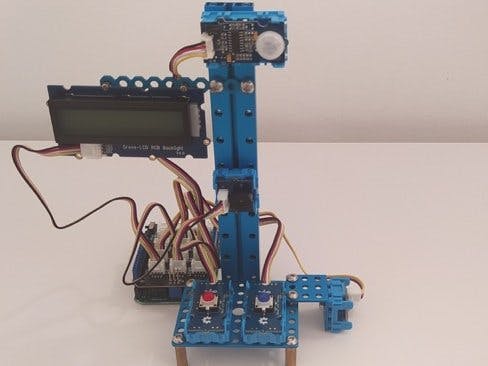 For this project we will use Grove modules, Makeblock structures, Grove wrappers, a 5mW / 650nm laser and an Arduino UNO with Grove Base Shield V2.0 for Arduino.

When you turn on the circuit, a screen will appear to align the laser light beam. This functionality will help us to adjust the laser pointer to the exact position on the light sensor. Adjusting the beam at the exact point on the light sensor we will get the maximum value that the sensor can read (65535). In this way, if the light beam between the laser and the sensor is interrupted at some point, we will obtain a lower value than indicated and it will mean that an object has crossed it.

When the laser pointer is in the correct position, the LCD screen will turn green with the text "TEST: OK" and the red button LED will blink, indicating that we can press it to continue. At this point we are ready to use the alarm. If the laser beam is not correctly positioned, the screen will remain red with the text “TEST: KO” and we will not be able to continue until it is correctly adjusted.

Once the laser has been adjusted and the red button is pressed to continue, the current status of the alarms will be shown (initially they will be deactivated): “LASER Alarm: OFF” and “PIR Alarm: OFF”.

To activate the alarm we have to press either of the two buttons (red or blue). Once the button is pressed, a countdown will appear accompanied by an acoustic signal to indicate the start of the alarm activation. During this process the led of the button pressed will also blink.

Once the alarm is activated, if the PIR sensor detects a movement at a distance of about 3 m or an object interrupts the laser light beam, the alarm will turn on emitting a sound and causing the screen to turn red showing the text “Alarm ! ! ! ! " followed by the name of the sensor that triggered the alarm.

To turn off the alarm, just press the button whose LED is blinking.

We will connect the different Grove modules to the Shield “Grove Base Shield V2.0 for Arduino” as follows:

The assembly will be as follows: 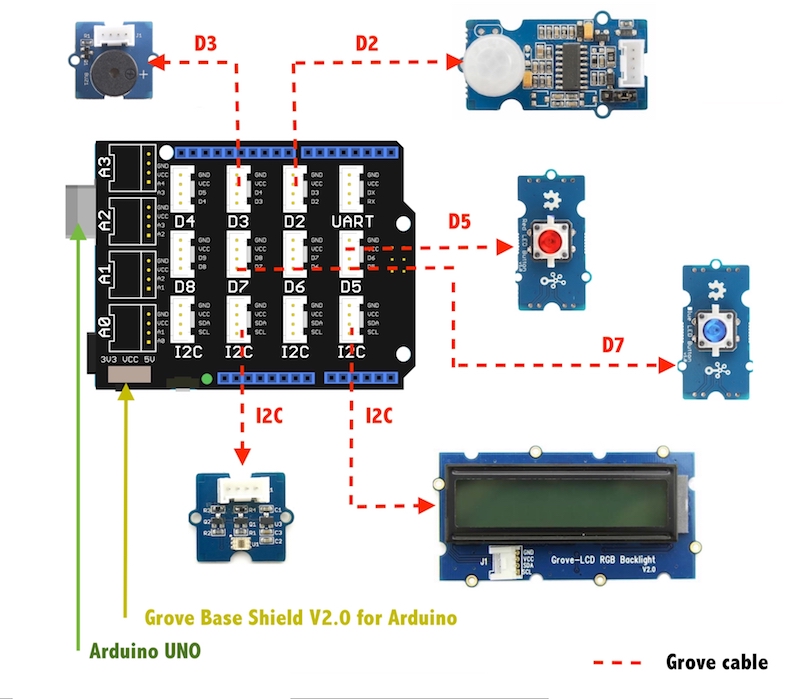