Make a suitcase that can open using the secret buttons.

Make a suitcase that can open using the secret buttons. 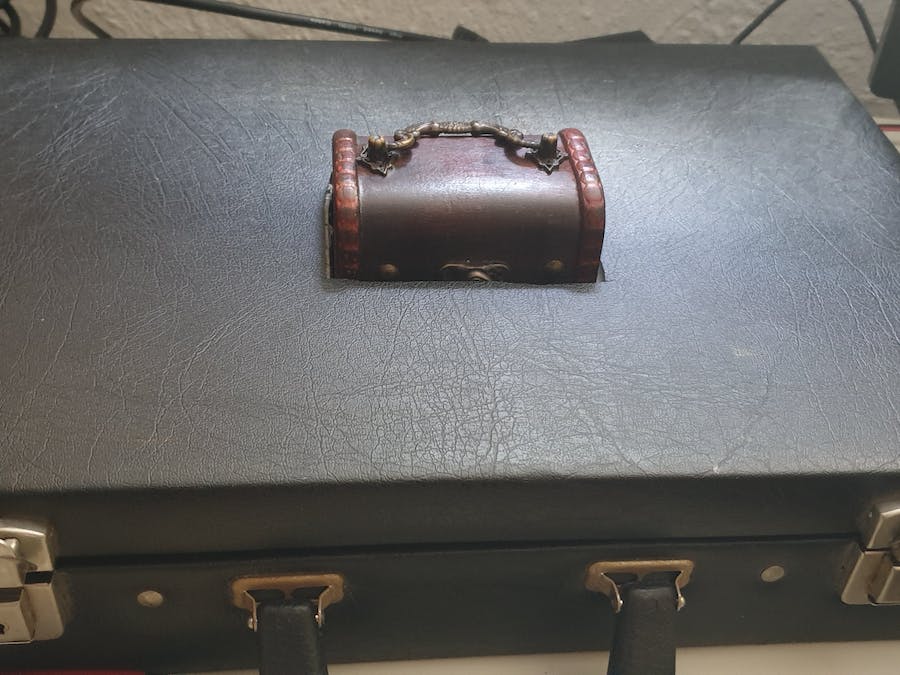 I had to make an Arduino project foor school. As an escape room employee, I thought it would be fun to make my own escape room puzzle. The plan was to make this with six different sensors, but because time was an issue, I decided to go for two instead. This way, you need at least two people to open the chest. (Which means you also have to have a second person around sometimes to test if everything still works)

The suitcase is supposed to be locked in the end, so only the small box can open if both sensors are activated.

To make sure the small box can only open if the sensors are activated, I used a servomotor that blocks the unlock mechanism of the small box. I used double sided tape (carpet tape is the most ideal) to keep it in place. The arm of the servo was too thin, so I simply wrapped a led around it. the led is only as extension of the servo arm, so not hooked up to light up.

The servo arm blocking the closure of the box

The next step was to install the button and the force sensor in the suitcase and route the wires through. I used the same technique used for dermal anchor piercings to get the button underneath the fake leather, which goes as follows: I soldered the button and it's wires to a very small part of island board. Then I drilled a hole in the wood from the inside of the suitcase, being carefull not to damage the leather on the outside. Then i made a small slit in the leather at the edge of the suitcase. I pushed a random long wire through the hole to the slit, taped that to one wire of the button and pulled them underneath the leather one by one. When they were both all the way through, i pulled them, guiding the islandboard with the button under the leather. when it was in position, I made a tiny hole right on top of the button and pulled it over so only the black button part was visible. The last step was to use a marker to make any wood visible behind the slit black so it's less noticable

The button underneaht the leather

I used the same technique for the force sensor, only i made the slit less towards the edge of the suitcae, so The wires go one way towards the hole in the suitcase, and the force sensor goed the other direction. This way, the connection is right underneath the slit, and can easily be modified. Note that if you have a male/female wire, you want to guide the female part through the hole, because the male part breaks easily (mine both did, so i had to do it again). In the end I thought the slit was a bit too big, so I stitched it back up at the edges. If you want to do the same, make sure you use a subcutanous knot (so the ends of the thread meet underneath the leather, and the knot also ends up under the leather instead of on top of it).

The connection of the force sensor. the wires go to the left, and the sensor is on the right

I first hooked the force sensor up to a small breadboard to test if it still worked, and then i soldered it to another small part of the island board.

This suitcase happened to have a double layer and an elastic band, made to hold papers, but I found it ideal to hide all my electronics. I had to refold it a little so it wouln'd dammage any parts.

My arduino didn't come with a case, so I made a case with cardboard and foamrubber, but if you have an Arduino with a case, you can just use that. I taped the arduinocase in the suitcase, I taped the battery in place, and I taped some of the wires down.

What the whole thing looks like on the inside
The inside with the double layer closed.

So that is how I made the system that aquires two people to open a chest. If it ever gets used in an escameroom, I think it's fun how the suitcase itself cannot be opened. I hope people will focus on finding the key instead of examining the suitcase itself.