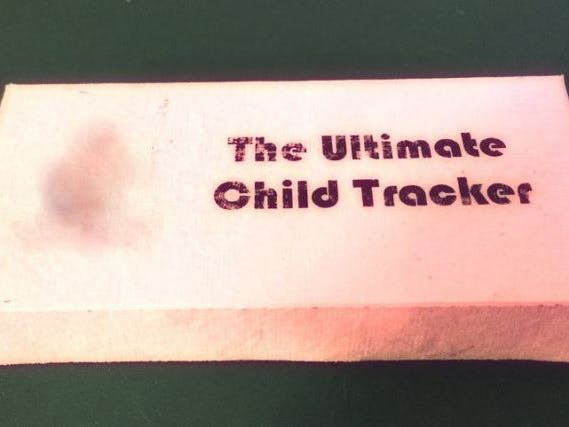 I was looking for a simple small device that could track my child (4-year old) whenever I wanted and looked around for some commercial products that were available. There are many products available, however most of them were very limited (required a home station within range) or had expensive monthly subscription fees. Then it struck me, that mobiles these days are the perfect tracking devices, with easy tracking ability using just GPRS (and some with GPS as well). Android and Google / iPhone and iCloud provide the perfect combination to track the phone. The only problem with this idea is that the phone can be left behind / dropped / broken by the child and I needed something small enough to be pinned to the child's clothing (and difficult to break)

One of the worst nightmares for a parent is when your child is "missing". He / she may be just around the corner, but not know where they are can be a perfect recipe for a panic attack. Statistics show that during 2013, a daily average of 1,720 parents or primary care givers felt the disappearance was serious enough to warrant calling law enforcement (in the US). [Source: https://www.fbi.gov/about-us/cjis/ncic/ncic-missin... ] The worldwide figures would be even more alarming.

I was looking for a simple small device that could track my child (4-year old) whenever I wanted and looked around for some commercial products that were available. There are many products available, however most of them were very limited (required a home station within range) or had expensive monthly subscription fees.

Then it struck me, that mobiles these days are the perfect tracking devices, with easy tracking ability using just GPRS (and some with GPS as well). Android and Google / iPhone and iCloud provide the perfect combination to track the phone. The only problem with this idea is that the phone can be left behind / dropped / broken by the child and I needed something small enough to be pinned to the child's clothing (and difficult to break).

I came up with the following wishlist:

The original plan was to use the RePhone, but my C skills are rusty and I'm more comfortable with the Arduino series of boards. Seeed Studio also makes another board for wearables that had what I needed. It's called the Xadow. It's an Arduino Leonardo compatible board with multiple modules that can be used to create a smart wearable easily.

The two most frequently used trackers are GPS based and GPRS based, both with their advantages and disadvantages; some combining both to get the best results.

According to Wikipedia, the Global Positioning System (GPS) is a space-based navigation system that provides location and time information in all weather conditions, anywhere on or near the Earth where there is an unobstructed line of sight to four or more GPS satellites.The system provides critical capabilities to military, civil, and commercial users around the world. The United States government created the system, maintains it, and makes it freely accessible to anyone with a GPS receiver.

The GPS concept is based on time. The satellites carry very stable atomic clocks that are synchronized to each other and to ground clocks. Any drift from true time maintained on the ground is corrected daily. Likewise, the satellite locations are monitored precisely. GPS receivers have clocks as well—however, they are not synchronized with true time, and are less stable. GPS satellites continuously transmit their current time and position. A GPS receiver monitors multiple satellites and solves equations to determine the exact position of the receiver and its deviation from true time. At a minimum, four satellites must be in view of the receiver for it to compute four unknown quantities (three position coordinates and clock deviation from satellite time).

According to Wikipedia, GSM is a standard developed by the European Telecommunications Standards Institute(ETSI) to describe protocols for second-generation (2G) digital cellular networks used by mobile phones, first deployed in Finland in July 1991.[2] As of 2014 it has become the default global standard for mobile communications - with over 90% market share, operating in over 219 countries and territories.

The cellular network is distributed over land areas called cells, each served by at least one fixed-location transceiver, known as a cell site or base station. In a cellular network, each cell uses a different set of frequencies from neighboring cells, to avoid interference and provide guaranteed bandwidth within each cell.
When joined together these cells provide radio coverage over a wide geographic area. This enables a large number of portable transceivers (e.g., mobile phones, pagers, etc.) to communicate with each other and with fixed transceivers and telephones anywhere in the network, via base stations, even if some of the transceivers are moving through more than one cell during transmission. Cellular networks offer a number of desirable features:

As each tower in a cellular network provides a unique identity code, it is possible to triangulate using 3 or more towers to get your position. The more number of towers available, the more precise your location.

You can find more information on GSM tracking on the following pages:

I decided to go with GSM based tracking as even with the GPS tracking, I would have needed a cell phone connection for my other features (calling, SMS, etc). GPS tracking is much more accurate, but needs a larger module and battery. (Maybe in the future)

I decided to use the following hardware for the tracker:

Please note, there are many other options available and I chose these mainly because i had them available (and in the case of the GSM module - it's cost)

The Xadow Main Board is a microcontroller board based on the controller ATmega32U4 with 32k flash and is compatible with the Arduino Leonardo. The board can be powered either from the USB connection or a Lithium battery (included) and hence can be easily used as a wearable.

The Xadow Modules cascade with each other using FFC cables. Since the pins on the module are not broken out, we need to use a breakout module that breaks out the RX/TX pins and allows us to connect to the SIM800L Module.

Also, since the module is compatible with the Arduino Leonardo, it has two serial ports (One through USB and one on RX/TX pins) which makes it easier to debug the arduino sketches.

The SIM800L is a quad-band GSM/GPRS Module, effectively making it usable across the world. It has the following features:

SimCom has provided a lot of documentation on the best ways to use these modules and Adafruit is kindly hosting all of them for us:

They have also created an easy to use library: https://github.com/adafruit/Adafruit_FONA_Library

The circuit is very simple:

You can test the module using the FonaTest sketch in Adafruit's Fona Library. I tested the circuit using my Induino development board (see image above).

The SIM800L module requires a working SIM card (with data). In India, there are many affordable pre-paid plans by all the major carriers (Airtel, Vodaphone, etc) as low as INR 105 (~USD 2) for 300 MB per month. Unfortunately in US most of the carriers have "unlimited" plans ranging from $40-$80 per month. For this application, you would need at the max 10-20 MB per month.

The only service provider I found that was budget friendly was Ting (working on the T-Mobile network) which comes to ~USD 9 (plus taxes) per month for 1 device and upto 100 MB of data per month.

So, I went ahead and bought a Ting SIM card and installed it on the SIM800L module. Please note, the chamfered edge has to point towards the edge of the slot and not inside.

The Arduino Sketch is heavily modified from the examples in Adafruit Fona Library.

I wanted to use the Xadow Metal Frame as the enclosure, unfortunately it has been discontinued by Seeed Studio.

So, for the time being I settled with a plastic enclosures that came with the Xadow Boards covered with a paper box. I went to TemplateMaker and created a template for the enclosure 4cm x 8.5cm x 1.5cm, printed it on card paper and put the entire circuit within it. The only problem with this approach is that the entire device needs to be opened up to charge, however, the intent is to have a 3D-printed enclosure that exposes the USB port for charging.

The entire device is tied to the arm using a velcro tape and can be hidden under the jacket / loose shirt.

The final product has the following features:

Set up location tracking, so that the module automatically sends location to an MQTT server when either of the following conditions are met:

DISCLAIMER: I have tested this device, however do not provide ANY warranty whatsoever.