We needed a doorbell for our office's freight elevator.

We needed a doorbell for our office's freight elevator. 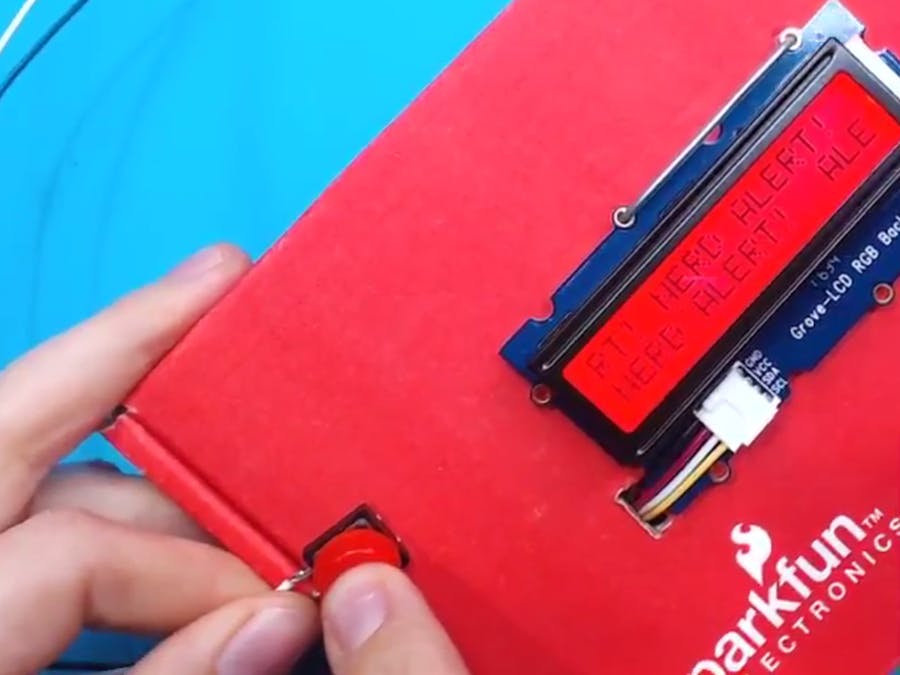 This one uses a red-backlit LCD display, showing "NERD ALERT!", as well as a typical siren noise, to indicate that somebody needs to come rescue me when I push the button in the elevator.

I wanted something quick and dirty to shove in a cardboard box; it didn't need to be small or pretty, and so I used an Arduino 101 with a Seeed Grove kit. (An Uno would do just fine, and work the same way.)

After plugging the Grove base shield into my Arduino, I plugged the buzzer module into pin D3, and the RGB backlit LCD module into an I2C port. I wanted the button to be simple, since I have to run cable all the way from the door to the inside wall-mounted module, so I used a regular button with two wires attached to pin D2 (on the Arduino's standard female headers) and GND. Condensed version:

Make sure you have the Grove LCD shield set to 5V! If it's on 3V3, the text doesn't show up – just the backlight.

I'm powering the whole thing with a 12V wall plug that feeds into the Arduino's barrel jack. I don't want to use a perfectly good USB cable for something that's just gonna stay plugged into the wall. ¯\_(ツ)_/¯

I cobbled together something fairly disgusting from the Seeed Grove Kit examples on GitHub; you can download my code below. I did have to download and install the Arduino library for the LCD. (To do this, unzip the file and place it in your /Arduino/libraries folder.)

I figured that an alternating minor third (A-C-A-C-A-C...) would do for a siren noise, and I didn't really care what pitch or octave it ended up being, so it's probably a little inaccurate. Being fairly low-pitched, this is actually not that annoying. I may have to do better.

I used the INPUT_PULLUP mode for the button, because that means I don't have to stick a pullup or pulldown resistor in my circuit; it's all handled onboard by the Arduino.

When the button is pushed, the LCD scrolls "NERD ALERT!" on both lines, and it lights up with a red backlight.

Altogether, this build took me about an hour to debug. Then, I just stuffed the main bits into a cardboard box, ran the button wire to the elevator, and mounted both to their respective walls.