A series on the 8051 microcontroller that can be used in Teachings. Pedagogy resources that could be used for teaching 6-16 year old kids.

A series on the 8051 microcontroller that can be used in Teachings. Pedagogy resources that could be used for teaching 6-16 year old kids. 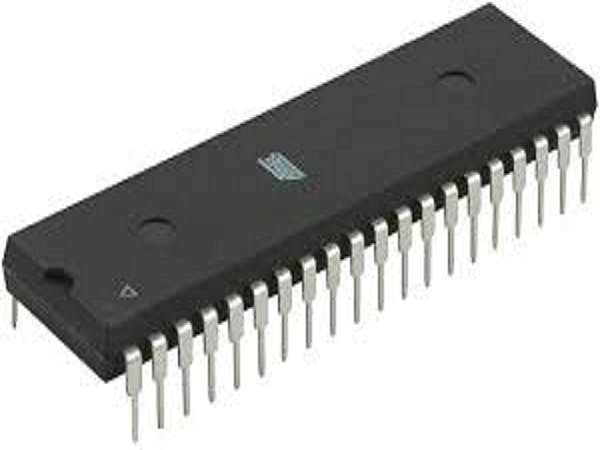 This will be a series of articles in various parts that will document practical step-by-step, hands-on approach on how to program the 8051 MCU.

The target age group here are 6-16 year old rookies. The focus will be STEM platforms so most of the hardware and software that were used will be tailored for those age group but alas there is no age barrier to be honest.

The 8051 made by Intel Corporation is an 8 Bit microcontroller device used widely in many hardware ranging from washing machine, trains, vending machines, automobile, cameras, in some traffic lights, in various home appliances to mention but few of those expanding areas that incorporate 8051 microcontroller family

The 8051 chips are used in a wide variety of control systems, telecom applications, and robotics as well as in the automotive industry. By some estimations, 8051 family chips make up over 50% of the embedded chip market.

The chip was called MCS-51 by Intel, it is a single chip microcontroller (MCU) family which were developed in the 80s mainly for embedded systems applications [

].The 8051 is single 8-bit MCU with many variant that enhanced it capabilities.The microcontroller have derivatives made by many vendors some of which are AT89s51, STC89c51. There are 8052 enhanced versions like the ATMEL AT89s52, NXP700, STC89c82 and many more…

According to its Wiki book [

, some of the features that have made the 8051 popular are:

The chip has 40 pins divided into four 8bit ports (PO, P1, P2 and P3), about 30 of the pins are available for various programming applications. Each pin can be configure either as input or output function by reference to the port values e.g. P0^1 (means port 0 pin 1).

There are variant of 8051 microcontroller in various capacities, enhancements including large memory up to and beyond 64kb or using external large memory modules, model-specific features, such as UART, ADC, Op_Amps, etc…

There are various textbooks and Internet websites on the study of Intel 8051 microcontroller family with numerous programming resources.

Although the 8051 is famously programmed in assembly and C language but some vendor have created tools in C++, Basic, Forth and Pascal for 8051 MCU domain.

There are also development IDE like Arduino IDE for programming 8051 derivatives like the AT89s52, STC89c82 and others.

In order to be useful any microcontroller will to be programmed for the target domain. It also may need to be configured with environmental values for then intended purpose.

Microcontrollers are used for specific applications.

They do not need to be powerful because most applications only require a clock of a few MHz and small amount of storage.

A microcontroller needs to be programmed to be useful.

A microcontroller is only as useful as the code written for it. If you wanted to turn on a red light when a temperature reached a certain point, the programmer would have to explicitly specify how that will happen through his code.

A typical bill of materials that could be adapted is shown below:

Here I explain the step that I went through to create circuit diagram and component layout for my maize chasing robot. I also how the hardware were wired up including their function.

The hardware and component parts were realised using the component specified in the BOM above. The following is the circuit diagram and followed by the actual hardware build in a step by step setup mode:

Schematic Diagram: This was made in KiCad [

] which an open source EDA for creating circuit and PCB diagram. The source code of this brilliant software can be download at [

] for those who will like to customise for pedagogy environment.

On starting up the software you will be presented with the above layout. To the right is the EDA editor for laying out electronics components like microcontroller, capacitors, resistors, sensors, etc…

Next create a new project, give it a name e.g. MaizeRobot. Next click to select schematic symbol (see 1 in the diagram above)

You will be presented with the schematic editor where you will place your components, the wiring and routing, etc… as shown below:

The completed schematic diagram is as shown below :

The maize chase robot electronics board was constructed based on the circuit diagram realised above.

The following steps outline how things were carried out in conjunctions with other materials including assembly and testing of the robot.

The chassis: this was made from a PVC plastic material, initial thought was base around using a wooden material for the chassis but it quickly turn out that it will not be the right due to weight, brittleness of the wood and environment impact. Also I wanted to teach how to 3D printed the chassis and for students to be able to replicate the chassis or customised it for their creativeness. Below is the photography of the chassis as taken with my mobile phone camera:

As you can see, holes are drilled out to house gear motor, for housing other components including the electronics board, motor driver shield, ultrasonic sensor, LED, buzzer, etc...

Component Assembly: individual component is assembled and tested before being mounted into the chassis and couple by wires with other electronics components.

Ultrasonic Sensor: as you can see from the schematics diagram, the ultrasonic range sensor whose main function is to detect objects along the robot path and to measure their distance from the robot.

, the following information were extracted:

The HC-SR04 ultrasonic sensor uses sonar wave to determine distance to an object just like bats or dolphins do. It offers excellent non-contact range detection with high accuracy and stable readings in an easy-to-use package. From 2cm to 400 cm or 1” to 13feet. It operation is not affected by sunlight or black material like Sharp rangefinders are (although acoustically soft materials like cloth can be difficult to detect). It comes complete with ultrasonic transmitter (labelled:T ) and receiver module (labelled: R ).

The timing diagram of HC-SR04 is shown below here. When initialised and working, for measuring the distance of an obstacle object, the Trig (Trigger) of SR04 must receive a pulse of high (5V) for at least 10us, this will initiate the sensor and it will transmit out 8 cycle of ultrasonic burst at 40 kHz. It will then wait for the reflected ultrasonic burst. When the sensor detected the reflected ultrasonic from its receiver, it will set the Echo pin to high (5V) and delay for a period(width) which proportion to distance. To obtain the distance, measure the width(Ton) of Echo pin. According to datasheet, the cycle period for HC-SR04 must not be below 50mS.

The distance can be calculated from the echo pulse width using the following equations.

Time = Width of Echo pulse, in uS (micro second)

In this project use the HC-SR04 was mounted on a breadboard to permit various testing and use cases/scenarios but in real-life it needs to be soldered and position well from reflecting objects.

Here is the screenshot of my implementation of the HC-SR04 for my robot:

Motor used in this project is a dual axis DC gear motor with the following operating values:

The motor is DC Dual Axis Plastic Gearbox Motor with a gear ratio of 1:48[

]. Two of this were used in this project labelled M1 and M2 in my schematic diagram.

L293D motor driver is employed in this project. The driver circuit was constructed as given from the schematic diagram shown earlier.

The AT89S52 microcontroller can only output about 70 milliamp. As you can from my discussion on the DC motor above, this will not be enough to drive the dual axis DC gear motor used in this project hence we need a motor driver that drive larger loads.

This is an integrated circuit (IC) module that operates as a “Quadruple Half-H Drivers”. The IC can be configured to drive two DC motors or a stepper motor (2 phase). According to the datasheet [

, it has the following operating modes and features:

With the proper data inputs, each pair of drivers forms a full-H (or bridge) reversible drive suitable for solenoid or motor applications. We use the motor application configuration in this maize chasing robot project.

and how it is connected with the two Dual Axis gear motors in my projects. Because I always wanted to learn more on how to build a motor driver from scratch, I opted to assembly the L293D on breadboard as oppose to buying a ready made motor shield.

Below here are the steps taken to realise the actual motor driver implementation in my project:

I have already covered the literature part of the 8051 as known as Intel C51 in the introduction paragraph and in the evolution trends of 8051 family of microcontroller which give rise to the AT89S52 as well.

Here the focus will be on the realisation and the usage of the AT89s52 in my project. Since this is the brain of my whole robot then it’s deserved a good coverage here.

Design and building circuit was never a straight forward experiments. There are many reason behind these, compiler problems, in-circuit programmer issues and various issues from power supply to decoupling, etc…

First here is the whole schematic circuit for the robot showing how everything is wired up together. Pin functions and connections were based its datasheet from Microchip website [

Components and their connections:

I actually order some 12 MHz types but it since it many weeks if not month before arriving from China and it is difficult to find in UK and the Maplin store no longer in operation.

A 9v volt battery was connected through a step down converter to obtained the necessary 5v needed to power the AT89s52 and Ultrasonic HC-SR04 sensor units while the other 9v was connected to the pin 8 (VCC-2) of the L293D motor driver device.

The complete assembly: the screenshot of the whole robot ready for testing and fine tuning is as shown below:

End of Part-1 of this series:

In the next part of this series, we will be looking at the programming side of our 8051 MCU robotics project where I will explain the algorithms that powers the robot and its accompanying C-language code that implements those algorithms. We will also show alternative programming platform for Python, Block based on Blockly and many more.... See You in Part-2

Till Then Cheerio and happy hardware hacking! 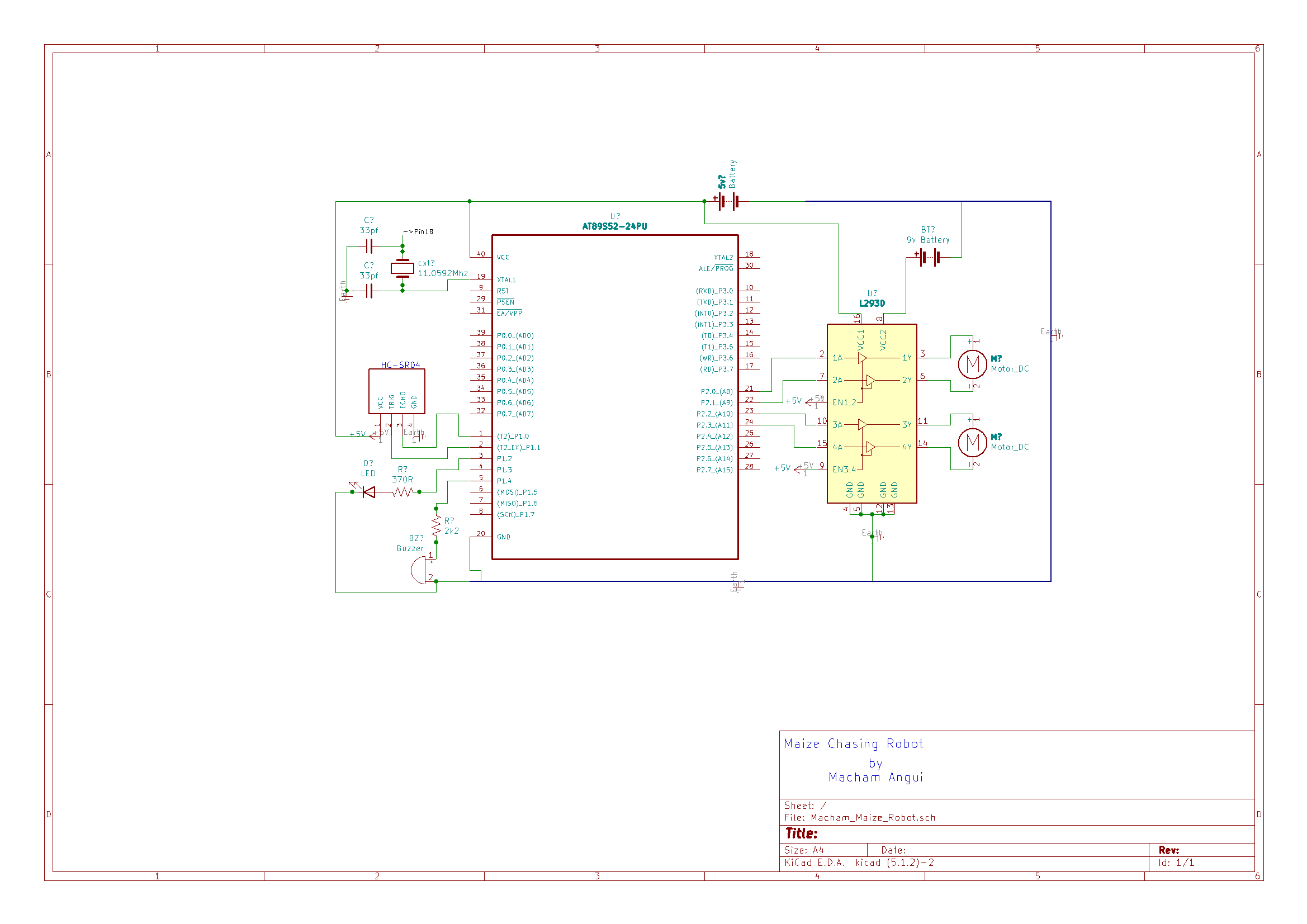